Located within the Valencian Community, Alicante pleases everyone who goes to it. It has all the ingredients to be a perfect destination: an enviable climate practically all year round, an ideal location with beautiful beaches and close to hiking trails, an infinite number of restaurants where you’ll taste delicious dishes and there are a good few places to go to in Alicante.

A good idea to start out visiting Alicante is by joining a free tour, which takes you round the prime tourist sites within the historic centre of the town. Remember that it is a free tour, but in the end it’s normal to leave a tip of around €10 for the guide (or whatever you think that is appropriate). Here we tell you about the best free tours in Alicante.

Any visit to Alicante’s old town has got to start or end within the Plaza del Ayuntamiento. The arcade of buildings that surround it have beautiful architecture and in the centre the little ones can have fun with the dancing fountain.

Climb the Castle of Santa Barbara, on the top of the Benantil mountain, this is one among the enduring places in Alicante. It is a Moorish castle, built in the 9th century, and during the war was used as a detention centre.  It’s best to travel in the evening to enjoy one of the best sunsets in Alicante. The part of the mountain where the castle sits is known as “la cara del moro” (the face of the Moor) because it is indeed human shaped! By the way, there’s a tour that reveals the secrets of this fortress and ends with a traditional meal.

If you opt to walk there (do it!) you’ll experience the Santa Cruz neighbourhood, one among the foremost characteristic and characterful parts of the tow.. With a network of narrow streets, bars and white buildings filled with flowers, it’s definitely a visit you cannot miss in Alicante.

Within the Santa Cruz neighbourhood, there’s also the Co-cathedral of San Nicolás, in a mixed style (Renaissance and Gothic) and built on what used to be an old mosque (you can see that the Arab heritage is very important in Alicante). it’s considered the foremost famous religious temple within the city and therefore the one that gathers the most faithful in its celebrations (and tourists at any time of the day).

Travelling to Alicante in May? You’re in luck: in this same Santa Cruz neighbourhood, the “Cruces de Mayo” (May Crosses) are celebrated. It’s a festival during which the entire neighbourhood is full of crosses made from flowers. It takes place once a year, from the 2nd to the 5th of May, and commemorates the moment when Santa Elena found the cross on which they crucified Jesus. We didn’t experience it firsthand, but we saw photos and that we think it is a spectacular time to go to the town .

Alicante suffered a lot during the war. A way to remember this sad chapter in its history is to go to the air attack Shelters Interpretation Centre. There’s a 2-hour tour (5€) that takes you through the darkest years and through which you’ll visit two air-raid shelters.

A walk along the famous Esplanade of Spain, with its wave-shaped mosaics and the beautiful Casa Carbonell, are some things you’re sure to do. Did you know thatthey form this promenaded from over 6 million mosaics? I

Another place to travel for a pleasant walk is that the Port area. There’s always a lot of atmosphere and other people browsing among the yachts and fishing boats. There also are many little bars where you’ll be able to have a refreshment.

And if seeing such a lot of boats has made you want to get on one, do it and head to Tabarca Island, the sole inhabited island within the whole Valencian Community (although more than an island it’s a true archipelago, as there also are 3 islets, La Cantera, La Nao and La Galera). Getting there’s easy, there are frequent boats that leave from the port of Alicante and for around €20 they take you there and back. Once there,e you’ll visit several of the town’s architectural sites, like the churches of San Pablo and San Pedro, or just enjoy the beach, which is stunning. At night, attend Calle Castaño: it’s one among the best places to have a drink or order a “tardeo” as they say here.

Summer is the best time to enjoy Alicante and also the nearby Costa Blanca, which is dotted with beautiful beaches where you’ll be able to sunbathe and swim. The best thing to do is rent a car and take a road trip along the coast.

Although you do not need to leave the town to enjoy its beaches: Alicante has several beautiful beaches, like Playa de San Jua,, Cala Cantalar, Playa de la Albufereta and Playa del Postiguet.

We are enamored with the local markets, and in Alicante the most famous is that the Central Market, where you’ll be able to lose yourself among the various stalls of fruit, vegetables, meat, fish and sweets. The building is extremely beautiful, in Valencian modernist style, and has been active since 1922.

If you have several days of time and need to take advantage of it to get to understand another area, one of the best excursions from Alicante is the Cueva del Canelobre, the deepest caves open to the public in Spain, filled with stalactites and stalagmites and which may be visited with a tour of about 40 minutes (in Spanish and English).

Our favourite option is to rent a car and visit two of the foremost beautiful villages in Alicante: Altea and Villajoyosa. There’s also a six hour tour which will take you to see them. If you’ve got a couple of day’s time to invest in this mini road trip, we think it is an excellent idea.

The last excursion we propose is the one to Elche and Santa Pola, by which you’ll get to understand two of the great jewels of the Valencian Community. If you do not have a car, you can go on a paid tour. 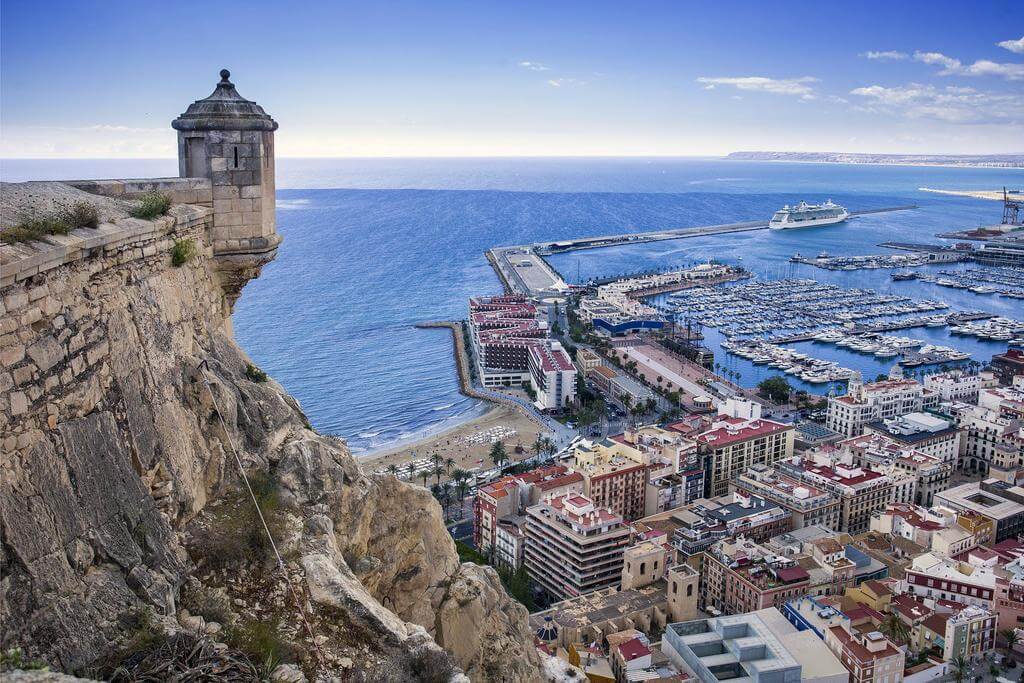 What To See in Alicante